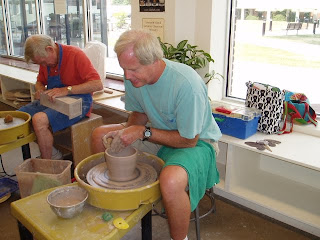 This fall Mac is taking his first official pottery class at the Sawtooth School for Visual Art.  We found out about the classes through a mutual potter friend, Gaff Pearce.  Gaff is the teacher of this class and he owns the Lazy Lizard Pottery.  We met him and his wife, Martha, at the first Seagrove pottery show we did in Greensboro, NC.  They do beautiful work.  Anyway, we like their style and Mac decided he would like to learn from Gaff.
We had never been to Sawtooth and when we got there, we were in awe!!  They have just renovated their pottery studio and it is fantastic.  We wish we had a studio that large.  There are windows all around the area where the potters throw.  It is very open and well laid out.
I know Mac will learn a lot from Gaff.  He has already taken away some new techniques and there will be more to come.  I cannot believe we have had our pottery business for seven years (we incorporated in 2003) and Mac has been throwing since 2000, but this is the first official class he has ever taken.  Too bad they cannot help me!!!  Actually, it is a good thing.  If I could throw, I am sure there would be another wheel bought and I would be put to work more than I am now!!!  Really, I wish there has been either a handbuilding class during his or one on precious metal clay jewelry.  Those are the areas I would be interested in.
The picture of Mac shows part of the windows behind him.  You can kind of imagine what the studio looks like.
Until the next time.  . .
The Potter's Wife :)
Palm Tree Pottery
Posted by palmtreepotteryltd@gmail.com at 4:43 PM